October 2022:This month we looked at the offerings from Google and Amazon along with the new Apple iPone 14 Pro.. .

September 2022:This month Alex was away but left us a video on the new AMD Ryzen chipsand we had a few other topics. .

August 2022:This month we had a look at Alex's just delivered M2 Mac Air and a lot of other topics.

July 2022:This month we meet Dean Williams, a Dark Web and Norton 360 expert from Norton LifeLock

June 2022:This month we looked at The Google IO conferance and Acers new offerings

May 2022:This month we looked at The Google IO conferance and Acers new offerings

April 2022:This month we looked at the upcoming Google IO, Ancestry and My Heritage, Canvan and Studio

March 2022:This month we had Dynabook formerly Toshiba join us

February 2022: The new Samsung range Chrome OS and lots of other information.

August 2021: This month Alex look at the new features available on the new Apple OS along with the new range of Microsoft Surface laptops.

May 2021: This month we looked at new Apple watch.

April 2021: This month Alex took us through the latest released of the iMac and iPad with the new M1 chip.

March 2021: This month we has a look at the lastest Apple release's of iMac and Mac Mini

February 2021: Alex had a whole range of things to look at. Robotics, Cheap Smartphones and Plans, NBN and Starlink Internet connections

November 2020: Alex looked at the new iPhone 12 and Mac's launched at the Apple event held on November 10th.

May 2020: This month we looked at VPNs The birthday of PACMan and MS Solitarie and updates to IOS Via Zoom

March 2020: Was cancelled due to corona virus lockdown

September 2018 : OPPO and The Vodafone Foundation

February 2018: Our AGM and we had a look at the new speakers from Google and Apple

October 2017: The Microsoft Store returned to look at Edge and Virtual Realily

August 2017: We had two guests. Armourcard and Malwarebytes.

July 2017: Mr Michael Tyler, the NBNco Community Affairs Manager give us the latest on the roll out.

June 2017: Mr Richard Chan, Product Manager - Brand Memory at Samsung Australia, paid us a visit to take us into a deep dive of their SSD (solid state drive) range

May 2017: Our presenter from Armourcard had to cancel at the last-minute due to illness so Alex stepped in with a great discussion on various topics.

April 2017 : As our main meeting fell on ANZAC Day there was no meeting this month

July 2015: AppCompear, an App to compare or find applications, and Parrot with their new range Drones

June 2015: As promised last month, Lenovo paid a personal visit to show us their great range of products.

May 2015: Tonight Alex was at the Lenovo Tech World Conference in Beijing

October 2014 iMac, Ollie, and other goodes

September 2014 Google and Our 30th Anniversary

November 2012 - Nuance, Anti Virus, The iPad Mini and much more

Google Chrome is todayâ€™s most popular browser in the world, managing in early 2014 to capture little over 42% of worldâ€™s non-mobile browser usage, easily beating all of its competitors in the likes of Internet Explorer (18%), Mozila Firefox (15%), Safari (6%) and Opera (2%).

This complete domination was achieved not only by smart utilization of the WebKit rendering engine that enabled Chrome to be imbued with incredible speed, stability and ability to be run on old computers that had slow hardware, but also streamlining of user interface and introduction of advanced features that enabled all users to easily take advantage of numerous Google cloud services (cloud hosted bookmarks, profile info, full integration into Google infrastructure, including Gmail, YouTube and more). But, even though all these features were present, Chrome was very distinct in constantly trying to maintain its simplistic interface and feature set.

So what can you expect if you decide to start using Chrome browser today? You can expect incredible speed that was built on one of the worldâ€™s fastest JavaScript processing speed, fully-supported ability to customize your browser via 3rd party extension marketplace, instant syncing of your browsing sessions between desktop and mobile, and free access to up to 15 GB of online storage with Google Drive (sizes may change depending on current promotions).
Source: filehorse.com

Following on from the success of their Search Engine and Gmail application, Google released their Chrome version.1 browser less than two years ago. Developing quickly, version.5 was only released in May. Like their search engine, Chrome is uncluttered, leaving a large viewing window, but still packs more features and greater speed than other popular browsers.

The first surprise is Chrome's minimal interface, featuring a thin toolbar but no menu or status bars. And where the website address box also serves as Google's powerful search engine entry box. At the top left of the toolbar are webpage tabs, any number of which can be set to load at startup. Tabs that are used often can be "pinned" and miniaturised to save space as shown. You can easily rearrange the tabs by dragging, even bringing them down onto the page if you wish. Clicking the "+" button (not shown) or short-cut Ctrl+N opens a new window displaying "thumb-nails" of the eight most recently visited sites plus browsing history going as far back as you want. A back, forward, reload, home and bookmark button complete the basic controls.

On the other end of the toolbar, are two icons with drop-down menus. One is the "current page control" enabling common tasks like Cut, Paste, Print and the nifty Find box extension - short-cut Ctrl+F - as shown. Other tasks including "Create application short-cuts", zooming and Developer needs are also listed here. The spanner icon on the right allows you to "Customise and control Google Chrome" using a wide variety of choices. This is where you can open an "incognito window" plus hide or show a bookmarks bar - short-cut "toggle" Ctrl+B - as seen here. You can also check browsing history, manage bookmarks, downloads and more. Clicking the "Options" feature presents another range of choices including setting default "home" and other "startup" pages, adding passwords, etc.

There are also plenty of add-ons available to further customize Chrome if you wish, such as selecting from a multitude of to suit your personality. I have installed one - a Gmail Checker that is currently indicating I have one new message. Clicking on this button now takes me directly to my Gmail account for a quick response.

As an added bonus, Chrome version.5 is already compatible with the latest proposed W3C web standards and was the first browser to pass the demanding Acid3 test with a score of 100! Don't be left behind - download, install and try Chrome now - you'll be glad you did! jl

What is a portable app?

A portable app is a computer program that you can carry around with you on a portable device and use on any Windows computer. When your USB flash drive, portable hard drive, iPod or other portable device is plugged in, you have access to your software and personal data just as you would on your own PC. And when you unplug the device, none of your personal data is left behind. 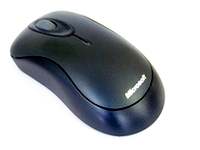 Sometimes you may want to photograph small objects without showing distracting backgrounds, glaring highlights or harsh shadows. Now with the aid of "instant" backgrounds made quickly from common home office items, you can easily produce high quality pictures without the expense of special studio equipment.

For demonstration purposes, this wireless mouse was photographed on an instant background using natural lighting from a single window. An even better image could have been produced had the camera been set on a tripod and adjusted using a variety of advanced capture settings.

All sheets are clipped together with two clips attached about one third up from the bottom. Another two clips are attached near the top of the sheets. By carefully sliding the top clips together with the rear three sheets down towards the bottom, a self supporting curvature is formed as illustrated.

Simply by positioning this or a coloured background with consideration to the light source and camera aspect, an infinite variety of subtle highlights or shadows can be achieved.

An even simpler 3D background can be made using just 1 sheet of paper, and 1 paper-clip. 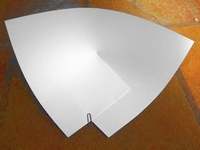 In portrait view, from a spot (about 20 minutes past the hour) tear to the centre of the sheet. Next, overlap the torn edges anything up to 90 degrees and use a paper-clip to hold. The over-lapped section now forms the base of your instant self supporting corner background. This provides even greater scope for extending your mastery of small item photography.

While lighting is beyond the scope of this article, I must mention having successfully photographed many small items outdoors by shooting within fully shaded areas while using these simple backgrounds. As always, the naturally diffused light from early morning and late afternoon sun normally produce the best results.
John Lucke