This Group meets at 5:30pm - 2nd Tuesday each month at Sydney Mechanics' School of Arts, 280 Pitt Street. Visitors are welcome

The PIC Club is the current format of the Programming Special Interest Group of the Sydney PC & Technology User Group
A PIC is a Programmable Integrated Circuit, or microprocessor.
We discuss programming, particularly PIC programming, and project design.
The PIC Club meets at 6pm, on the second Tuesday of each month.
1st Floor, Sydney Mechanics School of Arts,
280 Pitt Street, Sydney.

Come and show your projects, or see some others. We have a computer with a projector, so bring along your project on a floppy or LCD and we'll project it on a screen. We have a broadband internet connection, so discussion can be wide ranging.

The Programming Group are now reporting their meetings using Google Pages, all of which can be accessed here... 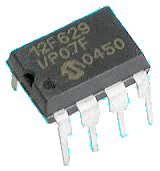 At an earlier meeting Andrew showed the electronic schematic for his water meter tester, and its program. All its functions are activated by a single PIC12F629, the smallest of the PIC micros. Martin showed a 3.5in LCD touch screen he bought on Ebay for his Raspberry Pi minicomputer. We heard of an improved way of transferring PCB artwork to the copper when using the iron-on or laminator process. Peeling off the paper from the copper blank usually results in some of the toner coming away with the paper. Instead the artwork is printed on alfoil, laminated to the copper blank, and submerged in hydrochloric acid. The acid dissolves the aluminium, leaving the toner artwork adhering to the copper, which is unaffected by the acid. The copper is then etched away by adding some hydrogen peroxide to the acid, or by other means. Precautions should be taken, working outdoors using goggles, plastic gloves and tongs, and avoiding the liquids and fumes.